Hampton One: Working, Building, and Racing on the Water Exhibit Opens at the Hampton History Museum on June 29


“Hampton One: Working, Building, and Racing on the Water” opens at the Hampton History Museum on June 29, 2019. This artifact-rich exhibition explores Hampton’s integral ties to, and love of, the water that surrounds the city, its seafood and maritime heritage, and passion for sailing as embodied in the locally developed Hampton One-Design sailboat, and the competitive sailing culture that grew out of it. 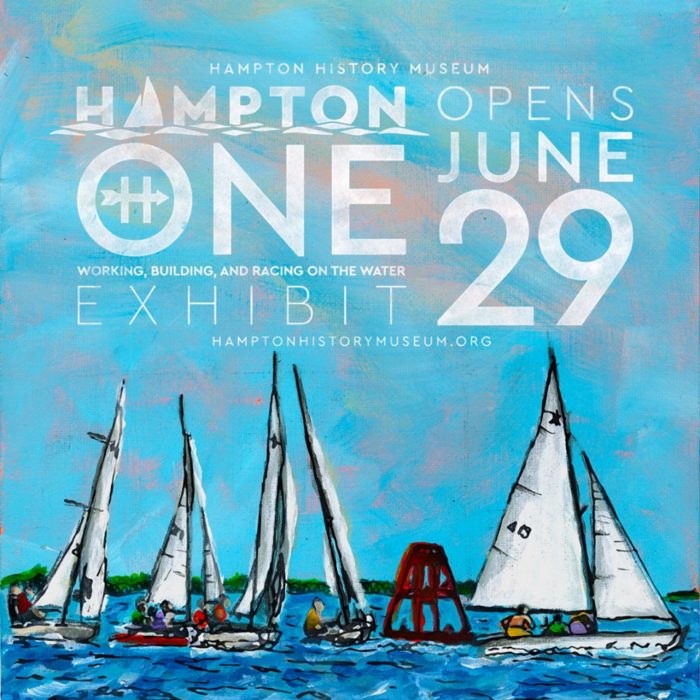 Launched into the boating scene in the 1930s, the Hampton One-Design sailboat is central to this story. The exhibit features a fully restored 1947 Hampton One sailboat, the jig used to shape the hull with a partial hull in place from around 1970, many tools, forms and photographs from the boat’s inventor Vincent Serio, as well as racing trophies and memorabilia from the Hampton and Norfolk Yacht Clubs, among other items. Video components include footage of regattas and other races over the years, along with images from Serio’s boat shop demonstrating how a Hampton One was constructed, from framing to launch. Dozens of photos capture numerous events and personalities associated with the history of the Hampton One and other Serio boats.

Hampton is a city of the water. Whether harvesting the seafood bounty, moving goods across nature’s original highways, or finding a ready field for competitive recreation, Hamptonians have always turned to their most abundant natural resource…water. Native Virginians built their city, Kecoughtan, here to have ready access to the fertile waterways. The English found the waters nearby an ample source of food and a lifeline to the mother country. Hampton thrived because the water around it provided ready opportunities for industrious watermen and the builders of their boats. Sail-powered skiffs and log canoes carried the working men into the waterways for fishing, crabbing and oystering. The log canoes, with their streamlined shape made particularly capable racing boats as well.  Sailing competitions became commonplace. By the turn of the 20th century, gas powered engines began to replace the elegant sails as motivation for the boats and sailing became less an occupation and more a sport and social event.

By the mid-1930s many Hamptonians longed for the days where sails filled the vistas of the waterfront. In its early days Hampton Yacht Club fell upon the idea of creating a one-class boat sailing competition to keep alive the rich traditions of the city. In response to this need, a local boat-builder, Vincent Serio, was chosen to design a small sailing boat, inexpensive, fast, easily handled that could be used in regattas and races. The Hampton One-Design was born. It proved to exceed all hopes as a vehicle to reinvigorate the intimate connections Hamptonians have with their surrounding waterways. Hundreds of the fast little boats were built by Serio, other boat-builders, and those using a kit.

“Hampton One: Working, Building, and Racing on the Water” celebrates that heritage. The core of the exhibit will be built around a recently donated Hampton One and the extensive collection of original tools, forms, jigs, documents, photos, trophies, uniforms, and other artifacts from the Vincent Serio collection, on loan from Vincent Serio’s grandson, Vincent J. Serio, III.

The exhibit will span the first and second floors of the museum. Greeting visitors in the first floor lobby will be the freshly restored 18-foot Hampton One #341 with its mast up. In the second floor’s 1700-square-foot changing gallery, the exhibit will continue to tell the rich history of boating and boat building in Hampton using the Serio collection and a selection of artifacts, images, and media from the museum’s permanent collection.

“Hampton One: Working, Building, and Racing on the Water” continues through December 31, 2020.

The Hampton History Museum is located at 120 Old Hampton Lane in Downtown Hampton. There is plenty of free parking in the garage across from the museum. Open Monday-Saturday, 10:00 a.m.-5:00 p.m., Sunday 1:00 p.m.-5:00 p.m. Closed major holidays. Admission is $5 for adults, $4 for seniors, active military, active NASA, AAA, children 4-12, and free to children under 4. For more information, call 757-727-1102, visit www.HamptonHistoryMuseum.org, or like the Hampton History Museum on Facebook and follow it on Twitter and Instagram.