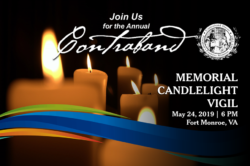 Join the Contraband Historical Society as they memorialize Frank Baker, James Townsend and Sheppard Mallory, as well as thousands of other freedom seekers who escaped slavery during the Civil War. The Annual Contraband Memorial Candlelight Vigil will be Friday, May 24 from 6 p.m. to 7:30 p.m. at Fort Monroe National Monument’s Cannon Park, 3 Ruckman Road.

Annual Commemoration of the 1861 Contraband Decision

Ceremony by the Contraband Historical Society marking the 161st anniversary of the May 24, 1861, “Contraband Decision” at Fort Monroe, The Contraband Decision was the first successful action by an official of the United States Government to confiscate enslaved people from their enslavers. That action signaled the beginning of the end of slavery in the United States. Featuring a presentation on the life of Harry Jarvis, contraband and soldier, who liberated himself and then fought to liberate others. Ceremony concludes with…